The notion of Machine Learning includes a wide group of statistical algorithms where a computer system learns on a set of training data and, after having completed its learning phase, uses its experience to generate predictions on new, unknown data. In the context of the capstone project of an advanced online training course at EPF Lausanne, a swissbib admirer takes the challenge to do Machine Learning with a set of library catalogue data in MARC 21 format. The goal of the project is to build an artificial machine being capable to find duplicate records in the data. The project is done with three distinct groups of models. In this blog, the results of a Decision Tree and a Random Forests model are presented.

The starting point for Machine Learning is data. The data generally consists of two distinct types of variables, features and its target. The variables of the data set that serve as input for computing the prediction are called features. The features of the data are constructed with the help of two records of original swissbib data containing raw information of a bibliographic unit, each. Such two records of raw data are paired in each of its attributes, calculating a numerical similarity distance for each pair of same attributes of the two bibliographical records, see figure 1. For example, for two arbitrary records, the mathematical distance between title1 (title of record r1) and title2 (title of record r2) are determined to be the feature titleΔ = sim(title1,title2), where sim(x1,x2) is a mathematical similarity function. For the project at hand, twenty distinct similarities of two times twenty raw data attributes like title, author, year, ISBN, ISMN, etc. are calculated for each feature record. Therefore, the number of features are twenty. A feature record is represented as an array in the memory of a computer system. All rows of feature arrays can be represented in the form of a matrix. Therefore, the full set of this data is called feature matrix. The total of feature records used for training the data is nearly 260'000.
The variable of a data set that is to be predicted by the machine is called output or target, see figure 2. Each feature record has its target value. For each feature record of the project described above, the target variable indicates whether a data row of features is either a row of unique records or a row of duplicate records. The possible target values are 0 (row of unique records) or 1 (row of duplicate records), resp. A more detailed description on how to calculate the feature matrix and its array of target values for the training data will be given in a later blog to come.
The idea behind a Decision Tree algorithm is that the computer system learns a set of sequential if-then-else rules that lead to a final decision. Each if-then-else statement is called a node of the Decision Tree. The nodes are arranged in sequences to form of a binary tree, see figure 3, which is the reason for its naming. In the swissbib project, the set of if-then-else rules is a sequence of thresholds for binary statements of one feature variable that can either be lower or higher than the specific threshold. To classify a feature record, the algorithm starts at the top of the tree and evaluates the statement in each node on its path down. Depending on the threshold value, the algorithm decides for the right-lower or the left-lower node as the next node until reaching the bottom of the tree. The final decision is called a leaf of the Decision Tree. The leaf concludes the decision wether the feature record is a pair of uniques or a pair of duplicates. During training a Decision Tree, the if-then-else rules of the nodes are adjusted iteratively until the Decision Tree predicts the target value of the training data feature rows with the highest possible probability according to a function to measure the quality of decisions, called criterion. When this highest power of prediction on the training data is reached, the Decision Tree can be used for predicting new, unseen data.
Decision Tree is a classical method of Machine Learning. Its advantage is its clarity. It can be easily interpreted when looking at the trained model tree. A Decision Tree classifier can be built with the help of different parameters. In the project, the varied parameters are the maximum depth of the tree as well as the so called criterion, the mathematical function to measure the quality of a split in the nodes. Several specific Decision Trees are calculated with the help of cross-validation and their prediction power is compared. The project finds the best Decision Tree for swissbib data to have a maximum depth of 26 nodes and a criterion of Gini impurity.

The performance of a Machine Learning classifier can be measured with the help of some metrics derived from the confusion matrix, see figure 4. The confusion matrix compares the predictions of a trained machine on some validation data with their given target values. Four cases can be distinguished. From the four cases above, a metrics called accuracy can be calculated, allowing a statement on the prediction quality of the model on unknown data. For swissbib's calculated Decision Tree, an accuracy value of nearly 99.95% can be reached. This accuracy means 27 wrongly predicted records on a total of 51'886 validation records.

For comparison reasons, a Random Forests model is calculated additionally. A Random Forests is an Ensemble method. It consists of an ensemble of Decision Trees that are assembled during the learning phase. Again, the set of best parameters for the Random Forests is searched for swissbib data and a number of 100 trees of maximum depth of 22 each in the forest is found to generate the best results. With Random Forests, an accuracy of nearly 99.95% can be reached, too, with the same total of wrongly predicted records of 27 on the total of the validation records.

The project is implemented in programming language Python, using library scikit-learn for calculating the models. The Random Forests implementation of this library allows for assessing the importance of each feature for prediction. Figure 5 shows the normed importance value of the features used. It can be seen that variable year is the leading variable for indicating wether a pair of records is a pair of uniques or of duplicates. Variable title is the second most important feature for the Random Forests model, but also author and volumes indication are of high relevance. The importance of features like coordinate and ISMN seem to be low. This is due to the fact that only few of swissbib's raw data are of format map of music. Therefore, only few of swissbib's raw data hold any information in these attributes. The results presented here, suggest swissbib to implement a new deduplication process with the help of a Random Forests algorithm, due its best overall performance on the training data. The project described here, implements some more models different to the Decision Tree and the Random Forests models. The results of those will be presented in some additional blog articles (see here).
Eingestellt von Andreas Jud um 20:57 Keine Kommentare:
Diesen Post per E-Mail versendenBlogThis!In Twitter freigebenIn Facebook freigebenAuf Pinterest teilen
Labels: Artificial Intelligence, Künstliche Intelligenz, Machine Learning, statistics, Statistik, statistique

For what feels like two or three years now, it has been almost impossible to find articles on the subject of data and information in which terms such as "Machine Learning", "Artificial Intelligence" (AI) or "Neural Networks" are not mentioned at least once and described as the recipe for success for the future. Should this mean that what we have been doing over the last 12 years is outdated and no longer relevant? The swissbib team is not known to shy away from new software technologies. We have always thought outside the box to see if new methods can be combined with our classic methods. The problem with this is that before you can choose, try out and perhaps productively use something promising from the multitude of possible options, you first have to fight your way through the basics and terminology of the new topic. Not so easy for a swissbib team that is not lavishly staffed with people and has to keep the shop (i.e. the "green, orange or whatever colored services") running.

In such a situation, sometimes enthusiasm for the subject, openness (also about software) and a network of people from outside our library organisations who can be made curious about cool projects with our data can help. This is what happened to Andreas Jud, a swissbib friend who studied Machine Learning methods in a continuing education course at EPF Lausanne. As part of his final project, he investigated which of the numerous methods can be used for clustering bibliographic metadata. On this blog series he will introduce the selected methods and results. The complete project work is freely available as a series of Jupyter notebooks.

In the swissbib project, the essence of all our activities is the handling and processing of (meta-) data. Normalizing, enriching, clustering (merging) as well as linking of information and all this on a machine basis is the foundation for our ability to offer services such as different discoveries, different APIs or services for third parties. Especially for the machine clustering of data we use the (commercial) software of a partner, which enables us to prepare data in a flexible way so that it can be used for different purposes. Over the years, this has not been a one-off process with a static result, but an iterative process in which we (in recent years especially our colleague Silvia Witzig) from the user side and our partner contributed mutual knowledge to the process of improving data preparation. Data preparation activities remain central to the quality of the services provided by swissbib.

Machine learning is based on data. Data from swissbib is therefore the foundation of Andreas' thesis at EPFL. With the data Andreas received in its raw form from the swissbib team, the resulting clusters are already of convincing quality. This is already anticipated at this point. After completion of the work, however, there are still areas that need to be worked on in order to transfer the results into a productive operation.
We would be pleased if you follow our blog series on the topic of deduplication of bibliographic data using machine learning methods. We are even more pleased about the active participation in and discussion of the topic.

Under these links you can access the individual parts of the three-part blog series, in which the different methods and their results are evaluated and compared:
A closing anecdote. While defending the project at the EPFL, Andreas sat across from examiners who said that he had worked with a "great data set". Of course, we were pleased about that, too. But perhaps this is also a sentence that makes you think about whether our data didn't deserve more than just being put into a library system with a relational database system.
Eingestellt von Projekt swissbib um 20:57 Keine Kommentare:
Diesen Post per E-Mail versendenBlogThis!In Twitter freigebenIn Facebook freigebenAuf Pinterest teilen
Labels: Artificial Intelligence, Künstliche Intelligenz, Machine Learning 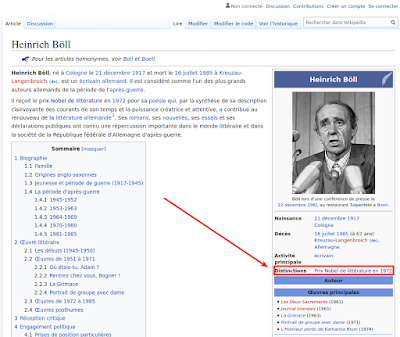 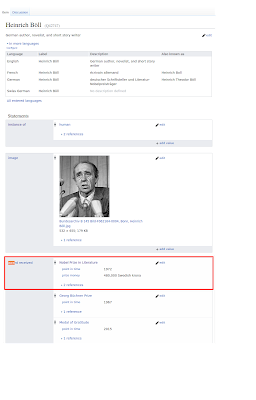 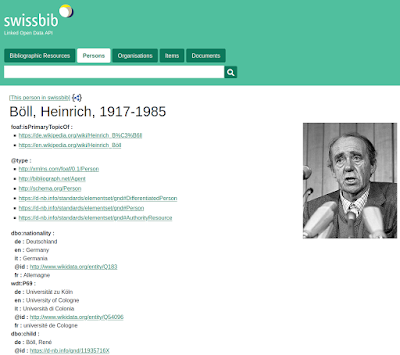 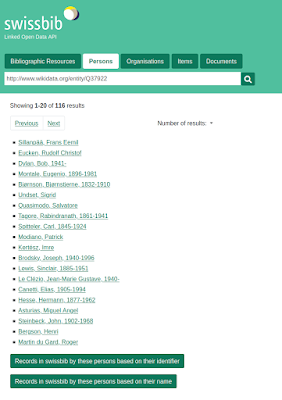 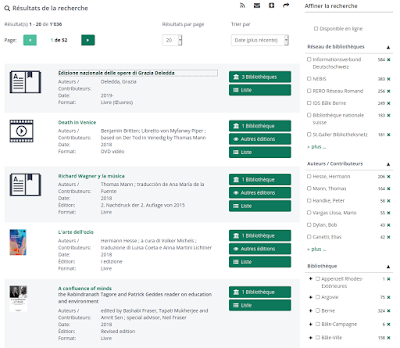